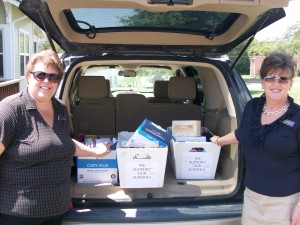 Diana Morris and Terry Barnard, with Diana and Terry Real Estate, launched the first of an annual school supply drive this August to support the Amelia County school system. They began with a collection of boxes in their office, and circulated information on Facebook and in flyers to area businesses, to encourage others to join the cause. “There is such a need for school supplies,” Diana explained. “Many of the educators spend their own dollars to have pencils pens, paper, notebooks, and other basic supplies.” The REALTOR® team delivered the collected supplies to the Amelia elementary, middle, and high schools, to an appreciative group of students. “We were very excited when the public responded and we were able to give these much needed supplies to the schools,” Diana said. “You could see the grateful appreciation and relief in the faces of those who received these donations. We were able to give to all three public schools, and we hope to make this drive a yearly event.”