This year, the National Association of REALTORS® published the results of a survey, which determined feature preferences among homebuyers across the United States.  The survey captured buyers who purchased a home between 2010 and 2012. According to a report on its findings, the typical home recently purchased was 1,860 square feet in size, had three bedrooms and two full bathrooms, and was built in 1996. 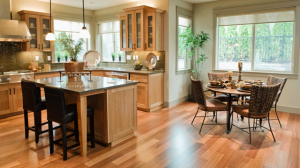 Not surprisingly, among 33 home features included in the homebuyer survey, central air conditioning stood out as the single feature considered “very important” by more than half—65 percent—of all buyers. Another most highly valued commodity was cable, satellite TV, and/or internet-readiness—followed by an eat-in kitchen.

Preferences in home features predictably varied by family size and first-time versus repeat buyers; but they also varied from region to region. For instance, finished basements were more popular in the Northeast and Midwest; Northeast buyers placed higher importance in dining rooms and hardwood floors; and buyers in the South valued central air conditioning, having a home less than five years old, and a wooded lot with many trees, compared to other regions.

Respondents were also questioned on which features they would likely spend more to obtain. Popular responses included air conditioning, new kitchen appliances, a laundry room, and a den/study/home office/library.

Homebuyers typically spent $4,550 on home improvements within the first three months of moving into a home—with kitchen and bathroom renovations, added/replaced lighting, and added/replaced appliances topping the list of the most common projects.

More details on the report are available at Realtor.org.

This article was published in the Richmond Times-Dispatch Homes Section on Saturday, October 12, 2013.